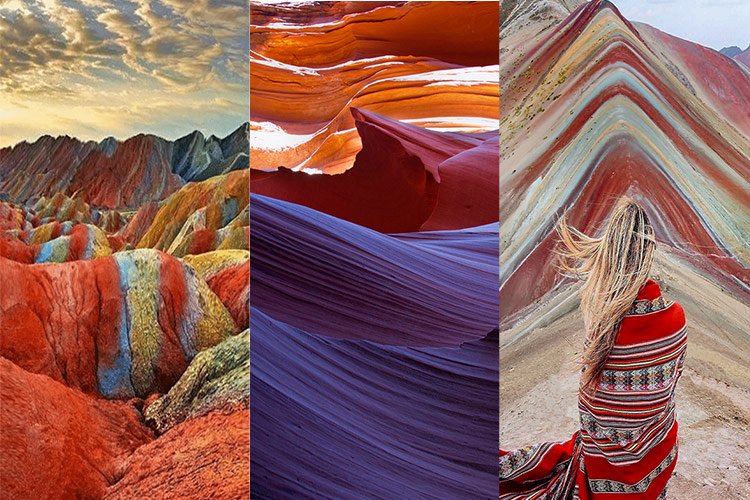 There are times that nature shows us wonderful landscapes that become wonderful Attractions. consequently. They go into a unique category when suddenly it is a visual show. Furthermore, this draws attract attention when it occurs in rare places that we can consider the admirable colorful orography Rainbow mountain Here we have a very good example, on three different continents. Such as Peru rainbow Mountain, China Rainbow mountain or The wave Arizona considered for our oun opinion rainbow mountains around the world.

Landscapes have unexplained places. At times it seems that it strives to show us an almost artistic beauty and sensibility. When this happens, places such as the Rainbow Mountain emerge, where it seems that the earth was taken as a canvas and the colors of Geology are creating a masterpiece. That is the case with three unique Nationa parks located in the United States, China, and Peru. those colorful natural formations appear to have spilled a gigantic ambit Wave of paintings. Completely changing its appearance and landscape.

The Chinese National park is located in Gansu Province, in the northern West zone of the country. It measures about 520 square kilometers. A surface where the China mountains, low and rounded are of about 24 million years. The erosion has acted strongly on the sandstone sculpted with curious Mountain Painting forms.

The highlight is a fantastic colorful mountain. It is for the deposit of mineral and pigments on the rocky strata put in view by the orogenic action. Consequently, to differentiate tourists’ approach that rainbow mountain declared patrimony of humanity in 2010. They contemplate living the panoramic trails. Payment is necessary to enter.  To sightsee this route, either bus or walking gives you stunning Colorful views during your tour. There are viewpoints enabling in strategic places, in addition to crammed tourists with the best camera for photography on hand.

But Peru also has a similar place. Although it is much less known because the Andean country has so many tourist attractions. And the part of the tourism monopoly is taken by a handful of cheap companies that do not protect the trails and the flora and fauna of the region. UNESCO  is already recognizing Cusco city as one of the most beautiful cities in the world. But the truth is that those who visit this city entirely may thing differently. Cusco has many attractive archeological places such as the  Sacred  Valley and Machu Picchu Inca Trail, Choquequirao, also known as the second Machupicchu, Salkantay Trek, and of course the hidden Rainbow Mountain of Peru or native name Vinicunca.

In this plan, almost all travelers overlook the presence of the Ausangate mountain range. This glacier is over 6,372 meters altitude (the fifth highest peak of the country) located in the Cordillera de Vilcanota, a hundred kilometers from the ancient Inca capital. The Ausangate is frequented by mountaineers. But incomprehensibly, few people know that in its vicinity they have the chromatic show of Vinicunca Rainbow Mountain. A succession of elevations that have become creditors to the unofficial nickname of Rainbow Mountain Peru.

The best-kept secret of Cusco

Cusco, the capital of the Inca Empire is well known for being one of the most beautiful cities in South America. Its nearby Sacred Valley offers unique ruins and is also near the precious Macchu Picchu. What the overwhelming majority of travelers ignore is that just 170 kilometers southwest of Cusco. The rainbow fell from the sky to merge with the Andes of Peru.

It is surprising that until recently, this geological miracle was practically unknown. The mountain painted like a Rainbow. Or also known as Vinicunca in its indigenous denomination, is in the heart of the longest mountain range on the planet (7,240 km) and perhaps that is why it is also one of its best treasures. All those who have been there already agree that the place has soul, energy, and magic that makes it unique.

Vinicunca (Rainbow Mountain) is in the Willkanuta Mountain Range, nestled in the greater Andes Mountains, just 3 hours away from Cusco.

The best time to hike Ausangate is during the dry months between May and September. The shoulder months of April and October are also pleasant.

The Ausangate local community is one of the only few shepherding (raising llamas and alpacas) communities left in the world.

While Rainbow Mountain didn’t exist until 20

The Sacred-kept of the Wave is a Sandstone rock Formation Located in Arizona USA, near its northern border with Utah. This Natural formation is located on the slopes of the Coyote Buttes in Paria Canyon-Vermilion Cliffs Wilderness of Colorado highland.
The Wave National Park Arizona is one of the most highly searched hiking permits in the United States, located in the Southwest of Arizona. Located 40 minutes west of Horseshoe Bend and Antelope Canyon. This bucket list trip attracts people from all over the world, with well over a thousand people a day applying for just 20 permits. How to get a Wave Permit?

When Becoming Popular the Wave Arizona?

In the summer of 2009, Microsoft had a fabulous idea to include a photo of The Arizona wave Picture from Paria Canyon, titled the Sandstone Waves, Lower Antelope Canyon (Arizona, U.S) on the desktop wallpaper of Windows 7.[1]. since that moment on, the Arizona wave has been a relatively well-kept secret Rainbow mountain amongst real hikers, backpackers, Drawers, and photographers were dived to “Arizona Bucket List” and suddenly everybody wanted to go the Arizona Waves.

Does that include you? Be ready to jump through some hoops, but be ready to experience a place like no other on Earth, and an adventure of a lifetime awaits you!

There are few advantages to being a local tourist or U.S Citizen. And one of these is you can run over to Kanab and enter the wave Arizona permit lottery in the dead of wintry weather. And attempt to get one of the 10 daily Wave Arizona permits (the different 10 being accessible on-line months in advance. This used to be the way to get a greater chance because of the decrease in crowds all through the off-season, but no longer.

If you really want to go and hike the Wave, Arizona. For more information check out https://thewaveaz.com

If you apply as a solo hiker and you draw the last permit you don’t get to decide to bring a friend. If you apply as a group they will let you bring 1 person so you’re not hiking alone. Or you can refuse the permit and maintain your friendships.

During winter months, the visitor center is not available on the weekends, so they draw permits for Sat, Sun, Mon on Friday. All other days are normal; permits are drawn at 9 am for the next day.

The road to the trailhead can be extremely difficult to drive on if it has recently rained or snowed.

There is little to no reception, and people have died on this hike.

As with all desert hikes in the area, get a really early start during summer months.

The two closest cities are Kanab, UT, and Page, AZ, but AZ does not follow daylight savings, so check the time difference. Bring exact change in cash! 7$ a person

Thangs For readding Our Post. We really appreciate your personal comments to improve better our Blog Post in the future.

If you really want to visit Peru by Local we will make sure to have a great experience with us, Machu Picchu Vacation Package is your best option to visit our site www.tourleadersperu.com

The sunny state of Arizona is a place where you will not get bored quickly as there’s so many things to see and visit. Landmarks like the Grand Canyon are known all …

Thank for your Comments, Michael
There so many beautiful places around the world

I’ve been browsing online more than 4 hours today, yet I never found
any interesting article like yours. It is pretty worth enough for
me. Personally, if all site owners and bloggers made good content as you
did, the web will be a lot more useful than ever before.

yes, Cristina, You are right Thanks for your Comments.

Just checking in… and I wanted to leave a post because this morning I discovered a webpage writing about something virtually the same.The information wasamazing I admit.

It’s truly very complex in this active life to listen news on TV, therefore I just use the web for
that purpose, and take the latest information.